In an era of relentless educational change, it is somewhat counter-cultural, I suspect, to write a book with the title of ‘Reduce Change to Increase Improvement’.

My purpose in doing so, is to disrupt the assumption that change is always desirable, and to challenge educational leaders at all levels to think about why so much change and innovation falls short of its goals. I want to help leaders increase the payoff of their change efforts so that they undertake change less frequently but more successfully. I think it is time to stop talking about change and innovation and to focus on the far more ambitious goal of achieving improvement.

The distinction between change and improvement is critical because the conflation of these two big ideas contributes to why we have too much change and not enough improvement.  To lead change is to exercise influence in ways that move a team, school, network or system from one state to another. The second state could be better, worse, or the same as the first. To lead improvement, is to exercise influence in ways that leave the team, school, network, or system in a better state than before.

When we make a clear distinction between change and improvement, we increase the chance of robust debate about whether a proposed change – such as a modern learning environment; new literacy programme; new timetable or parent reporting process – is likely to deliver improvement. We can ask such questions as:

Instead of taking for granted that change or innovation will lead to improvement, we should do the opposite—that is, believe that change will not deliver improvement unless there are structures and processes in place for ensuring that all involved can learn how to turn the change into the intended improvement.

So how can leaders undertake change in a way that is likely to lead to improvement that is embedded and sustained? How can they get off the merry-go-round of change and onto the steady path of improvement? In my book I explain how to make this shift by comparing two approaches to leading improvement: the less effective but typical bypass approach, and the rare but far more effective engagement approach.

When educational leaders use the bypass approach they identify a problem, design or select solution strategies, and monitor their implementation. I call this the bypass approach to change because the leader has not rigorously investigated the tacit theories of action – mental models if you like – that explain the practices they wish to change. A theory of action (Figure 1) links what teachers do – their actions – with the beliefs and values that explain those actions, and with the intended and unintended consequence of those actions. 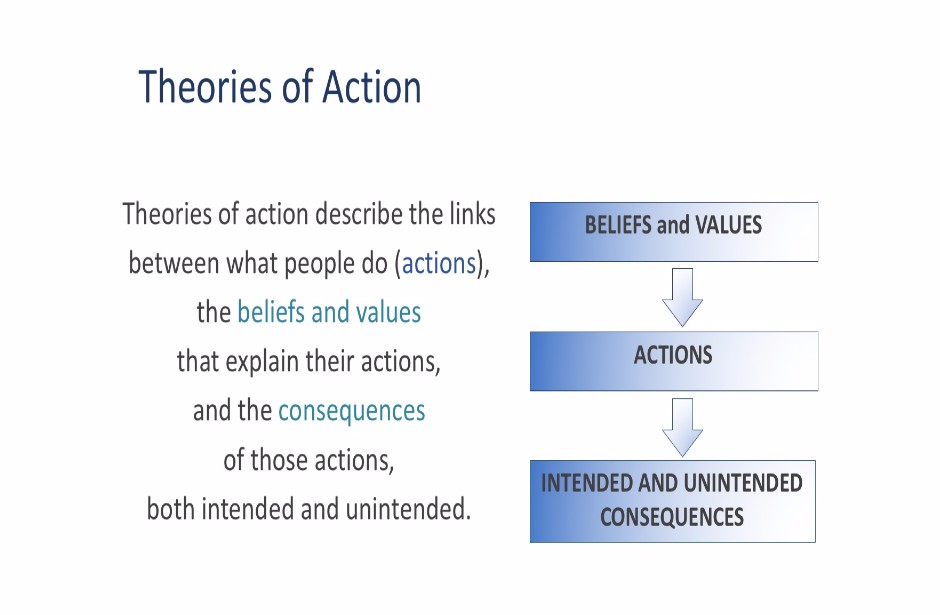 Without such inquiry, change leaders do not know, from the perspective of implementing agents, what is involved in making the change they seek.

Take, for example, leaders who are concerned about the persistent inequities in math comprehension and problem solving in their school or system. They learn from reliable research that ability grouping is a major contributor to such inequity because the low ability students get few opportunities to learn the skills of mathematical problem solving and they internalize the modest expectations their teachers have of them. The leaders consult with teachers, bring in the best math professional development available and get the usual patchy results – most teachers make an effort, a few teachers succeed in making the required changes, but most don’t and student outcomes don’t improve. Time runs out and the following year the math effort is dropped because teachers are overloaded with newly mandated initiatives.

What has gone wrong here?

As I show in Figure 2, when leaders use the bypass approach they drive change from their own agenda and advocate for their alternative theory of action – in this case teaching math through mixed ability groups tackling rich multi-level math problems. They use persuasive processes to get teachers on board, without agreement about why and how their alternative theory could lead to the desired improvement.

There are two types of outcome of the bypass approach. If the alternative practices are sufficiently compatible with teachers’ current beliefs and practices, then the result might be that teachers adapt their practice in ways that lead to improvement.  If, however, there is some conflict between the teacher's and the leader's theory of action, then the result, depending on the power of the leader, is either compliance or resistance.

Had leaders engaged with teachers’ current theories of action, they would have learned that teachers used ability grouping because they believed it was the best way to cater for the diverse abilities in their classes; that students in the low ability groups needed to focus on the math basics before being exposed to complex word problems, and that their students lacked the skills needed to learn from each other in mixed ability groups. Had they observed, listened and probed even further, they would have learned that some teachers did not have the classroom management skills needed to teach their students how to learn in mixed ability groups. For those teachers, the math initiative could not succeed without an additional explicit focus on classroom management.

In short, leaders in this example, attempted to improve math teaching and learning without understanding the scope or complexity of the learning agenda they had set for staff. Nor did they understand and discuss the points of tension between their own theory of how to teach math and the theory of action that was already in place. When such differences exist, leaders need to use an engagement approach in which the target of change is not teachers’ actions but the tacit theories of action which explain their actions.

Figure 3 shows the contrast between the bypass and engagement approach to leading improvement. In the engagement diagram, the leader still has an agenda and an alternative theory, no matter how tentative and underdeveloped. What engaging teachers’ theory of action requires is the ability to recognize that there are two theories at play, to create a dialogue about the relative merit of each, and to decide together whether it is worth trying to change in the interest of improvement. 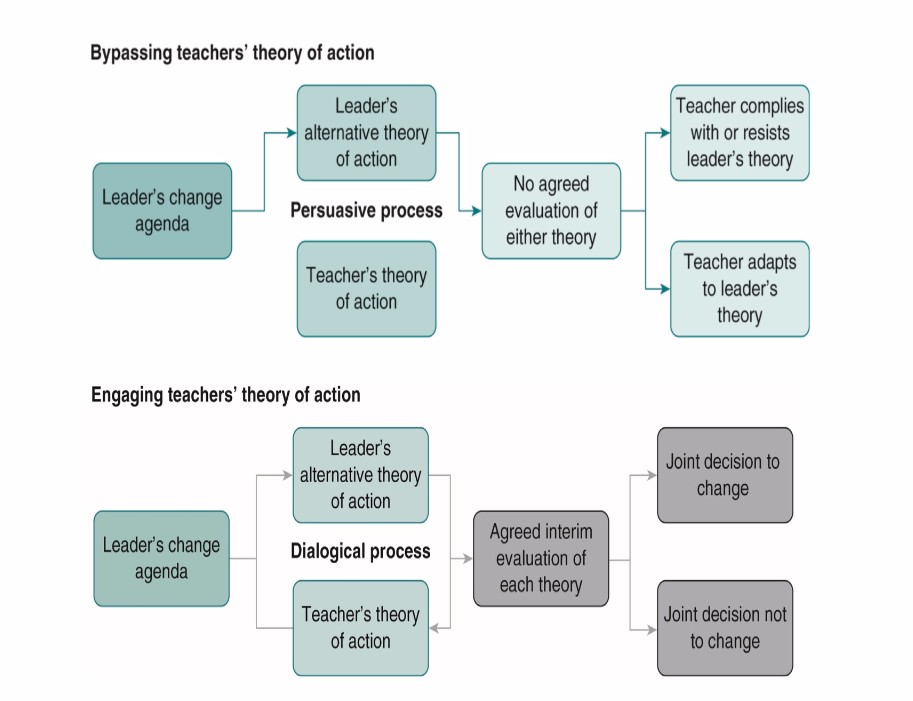 Leading improvement through the engagement approach means far more than talking with or consulting the affected parties. After all, the leaders of the math initiative I described earlier did consult with teachers about the changes they sought. Engagement involves a very specific type of consultation where change leaders inquire into the practices they want to change and discover the theories of action that explain and sustain them. They then lead a series of open to learning™ conversations about why they believe current practice requires improvement, about the alternative they are proposing and about how to resolve any points of tension between them. Paradoxically, one of the major reasons why change does not lead to improvement is that there is too much focus on future practice and not enough on the forces that explain and sustain the current practice.

Perhaps my key message is that the path to improvement lies in deep and respectful inquiry into the practices you want to change. Once your teachers agree that you have understood those practices, then, together, you can compare the relative merit of what they do now with what you are proposing. The goal is an agreement about whether your proposal is worth trying. From that point on, you experiment and learn about how to create a change that is truly an improvement.

My book, Reduce Change to Increase Improvement is available to buy in New Zealand or on Amazon.